Asia’s Mansion Sports and Entertainment Group has announced the opening of its first Mansion Sports Bar & Lounge, a high-end sports bar and restaurant in the Philippines. The new venue made its debut on December 30, just before the year’s end.

The event was attended by various local press and media companies, prominent influencers and bloggers, popular local personalities, DJs, and was also open to the general public. The ceremony featured Maria Ozawa from start to finish.

Attendees were in for a treat as some of the highlights of the event were a food tasting with Ozawa and Chef Sean, and a tour of the bar’s interior.

Additionally, the bar houses a karaoke facility and other forms of entertainment, “making it the go-to place for viewing parties and big celebrations.” Mansion Sports Bar & Lounge will also host popular DJs.

“Mansion Sports Bar & Lounge is not just a sports bar. It is where food is redefined, where drinks are reconstructed, and where fun is reimagined,” the company concluded. 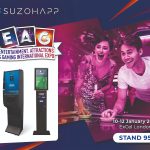