What will win Best Picture? 📽

It’s set to be an Oscars night like no other on Sunday 25th April as the delayed 93rd Academy Awards finally goes ahead across multiple venues.

With Covid restrictions playing havoc on preparations for this year’s ceremony, the awards action will cut between three ‘hubs’- LA, London and Paris – and two primary venues. The bulk of awards night will take place at the spiritual home of the awards, the Dolby Theatre, and for the first time ever, Los Angeles Union Station.

While film fans probably haven’t been to the cinema as much as they would like over the last 12 months, the rise of streaming has ensured most of us have had time to indulge in some tour-de-force performances.

With Oscars night the last stop of awards season, we already have a pretty good steer as to who will be taking home a statuette on the 25th. However, this ceremony can occasionally throw in the odd curveball – Olivia Colman’s shock Best Actress win in 2019 being just one example.

For the most tragic of reasons, this looks the most cut-and-dried award of the evening.

The late Chadwick Boseman (2/25) seems all but guaranteed to become only the second actor to be posthumously honoured in this category at the Academy Awards after delivering the finest of swansongs in ‘Ma Rainey’s Black Bottom’ before his untimely death at the age of just 43.

British actor Riz Ahmed (61/4) is also receiving awards buzz for his touching performance in ‘Sound Of Metal’, but it seems unlikely the Academy will spurn the opportunity to mark an exemplary acting career cut cruelly short.

This is the most interesting category of the evening from a betting perspective, with no clear front-runner.

It could be a very good night for the Brits indeed if Carey Mulligan (101/100) gets the gong for her against-type role in ‘Promising Young Woman’, but don’t rule out Frances McDormand (21/5) outflanking her late in the day with Academy voters.

She’s probably the least ‘luvvie’ of any Hollywood star, but is practically royalty when it comes to this ceremony.

The 63-year-old could make it a hat-trick of Best Actress awards if she wins for ‘Nomadland’.

While Carey Mulligan may have a nervous wait to see if it’s her name in the envelope, fellow Brit Daniel Kaluuya (1/32) will probably need to have his speech primed. He looks a dead cert to land the Best Supporting Actor gong for his role in ‘Judas and the Black Messiah’.

The former ‘Skins’ actor doesn’t seem to have too much competition in a relatively undercooked field, although Sacha Baron Cohen (15/1) may get some kudos for playing things straight in the highly-acclaimed ‘The Trial of the Chicago 7’.

Korean cinema is enjoying something of a renaissance following the glittering success of Parasite internationally.

Last year’s Best Picture Oscar winner has brought the country’s thriving cinematic output to a whole new generation of audiences, and the highly-acclaimed Minari could build on that film’s success in 2021 courtesy of veteran actress Youn Yuh-jung (21/100).

The 73-year-old is a huge star in her native country but now looks set for global domination as the red-hot favourite to take home Best Supporting Actress.

In terms of a value bet, Glenn Close (10/1) looks long overdue for some Oscars recognition after missing out on a gong a record eight times.

While her latest film ‘Hillbilly Elegy’ has been critically panned, a sense that it’s ‘her turn’ could see Close finally get to deliver a winner’s speech. After so many snubs, the Academy could think the timing is right here to look kindly on the 74-year-old as a recognition of her career ‘in the round’.

Only one woman has ever walked away with the Best Director statuette – Kathryn Bigelow for ‘The Hurt Locker’ in 2008.

Expect Chloé Zhao (2/39) to join that list on the 25th after winning universal acclaim for her adaptation of ‘Nomadland’.

If Zhao was to miss out, David Fincher (44/5) could be the beneficiary, given his Hollywood-themed ‘Mank’ will likely curry favour with Tinseltown insiders.

Based on the book of the same name, ‘Nomadland’ (13/66) looks increasingly likely to get the nod as this year’s Best Picture after building up a head of steam during awards season, already winning the BAFTA for Best Film and the Golden Globe for Best Motion Picture – Drama.

Its biggest competition could come from ‘The Trial of the Chicago 7’ (111/20) given Hollywood loves nothing more than an ensemble piece. It’s also a film that has received genuine pick-up with the public having been widely watched on Netflix since its release last autumn.

🎬 And the Oscar goes to: Nomadland
🤨 Potential upset: The Trial of the Chicago 7

Looking for the latest Oscars odds ahead of this year’s awards ceremony? 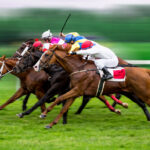