Most NBA players would admit that the NBA schedule is broken down into two seasons: the regular season and the playoffs. For NBA bettors, that means it’s important to recognize the differences in order to switch up strategies accordingly.

The good news? In many ways, the playoffs produce slightly more reliable (although I’ll stop short of saying predictable) results. The key is to focus on the right aspect of the games and ignore the ones that aren’t going to impact the outcome.

In this article, I lay out four things to pay close attention to when betting on the NBA playoffs.

In the regular season, there are a range of different factors that play into who is or is not on the court at a given time. Things like minute restrictions and rest considerations can be more influential than simply trying to put the most competitive team out on the floor at all times. Luckily, in the playoffs, this goes away for the most part.

Basketball betting is all about exploiting mismatches, and when one team has a player with a skillset that can’t be matched on the other end, it can have a huge impact on the eventual result. For example, if a team with a top-tier level big man goes up against a team that is lacking in that area, the focus should shift to whether or not you have confidence in said big man to take advantage of the matchup.

While most NBA playoff teams are competitive in their own way, each has a different strategy for how they’re going to attack the game offensively and defensively. Sometimes, two teams have similar strengths and weaknesses, but other times, for example, the small ball Houston Rockets and the big-man-heavy Nuggets present a situation where one team is going to have an advantage.

In its most basic form, I would suggest looking at each team’s top two best players. If the best two on each team matches up with each other in terms of skill, expect a close series. If they don’t, expect the discrepancy to become clear early on.

2 – Look at the Moneyline

If you’re new to NBA betting, let this be your daily reminder that betting for value should always be in the forefront of your mind when making decisions. Much like an investor that knows that it’s necessary to take on risk in order to profit, gamblers need to get comfortable with the concept of taking moneyline underdogs with some degree of regularity.

I’ll be the first to admit that it’s hard to get behind a strategy where you’re accepting that you’ll likely lose more than half your bets. With that being said, you need to force yourself to remember that if you can get good at picking moneyline underdogs, you’ll more than make up for your losses.

The next question to ask then is, how do you pick upsets? It’s an art and a science, but there are a few ways to get an edge.

First, consider what’s happening in the series. It’s not uncommon for a one- or two-seed to lose a game after getting out to a 2-0 or 3-0 lead. Historical data shows us that when a low seed gets down 2-0, the better team tends to let up a little, and the team that’s down in the series has extra motivation in order to get back in it.

If you’re looking at it strictly from a numbers and odds perspective, anything around the +200 mark is what I would consider “high value.” If you’re able to win a few of these games in the early rounds, it can put you in a position to be even more aggressive in the later rounds.

Remember, betting is not about winning as many games as possible, but rather, winning as much money as possible. The thing that separates the pros from the amateurs can simply be risk tolerance.

Many bettors would tell you that prop bets don’t provide enough value to take seriously. While this might be true in some cases, if you pay close attention to the league on a regular basis, you’ll have an advantage over the public.

Most prop lines rely on people’s tendency to rely on “recency bias” to make picks. Meaning, if a certain player has been hot lately, the sportsbooks will inflate their over/under point total on a prop bet and trap the bettors who think the hot streak will continue, regardless of other contributing factors.

What does this mean for you? For starters, it should be a wake-up call to always make sure you aren’t committing the recency bias mistake yourself. In fact, if there’s ever been a time to truly fade the public, it’s on a prop bet.

Some of my personal favorite plays involve looking at a team’s second-best scorer and betting on the over/under point total for a game. When focusing on this particular prop, it’s actually more important to look at the team’s top scorer to get the best prediction.

Teams have a tendency to place an increased emphasis on defending a player after they’ve had a huge game. For example, if Damian Lillard goes for 45 in a game, chances are, the other team is going to design their defensive game plan around slowing him down. That means, in the next game, a capable number two like CJ McCollum is going to have a bit more space to work with.

To continue with the example, NBA betting sites are likely to set Lillard’s total point number a little higher than it should be, accounting for the recency bias that is pervasive in gambling. In conclusion, it’s best to choose the under on the number one option and the over on the number two option.

While I have had much success using the strategy laid out above, it is important to mention that the odds need to be reasonable in order to pull the trigger. If the line is -120 or less, I’d recommend staying away. Any time the juice is high on a prop bet, it’s a risk that must be calculated carefully.

4 – Futures Can Be Profitable

On a game-to-game basis, results can be pretty hard to predict. However, if you’re betting on the series as a whole, it becomes a little bit easier.

In early-round matchups, such as the 1 vs. 8 or 2 vs. 7 matchup, it’s almost a foregone conclusion that the better team is going to win. I’m all about spotting an upset, but in these cases, it simply just isn’t very likely to happen, and historical data backs that up.

While you should be wary of making bets when the odds are -500 (and even higher), sometimes it can be worth the risk. If the end result is almost certainly going to happen, it can be okay to make these plays, just don’t get carried away with the amount you wager.

If you’re looking for a higher-value bet, look at the odds on which teams will end up in the finals (or come out of a certain conference). If the team with the second best odds to win the conference has odds at +200 or better, it’s not a bad idea to roll the dice and see if you can maximize the value.

The NBA Playoffs are one of the most exciting stretches in the sports calendar. For bettors who understandably want to pass on betting the regular season games, the playoffs can be a great way to get in on the action when the games are a played a little more “straight up,” so to speak.

In the end, the rules of regular betting still apply. Look for value, stay up to date on your bankroll, and always do your research before making a play. 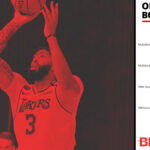