Illinois Gov. J.B. Pritzker on Friday signed a bill that lifts the ban on in-state collegiate sports. The legislation package also allows for a sportsbook at Wintrust Arena, lets new sports bettors sign up for accounts online instead of in-person as of March 5, and prohibits towns from imposing additional per-push taxes on video slot machines.

For the first time since sports betting was legalized in the state two years ago, bettors can now lay wagers on DePaul, Northwestern and other in-state college teams. Wagers on Illinois teams will only be allowed in person at one of the state’s casino or racetrack sportsbooks, not on a mobile application, which is how the vast majority of wagers in the state are placed. Wagers are also limited to the outcomes of games, not individual performances. Also, the in-state ban would be reinstated in two years unless lawmakers pass another bill allowing it.

This lift had been opposed by University of Illinois athletic director Josh Whitman, who argued athletes could face undue pressure and even physical threats from bettors, some of whom might even live in the same dorm. But industry leaders have argued residents can already bet on Illinois teams in nearby Indiana, If not illegally.

Illinois’ sports betting industry, launched in March 2020, already is among the three largest U.S. markets. October was the state’s biggest betting month yet, with a handle of $840 million in wagers placed statewide.

In addition, sports bettors in the state of Illinois will no longer have to register in-person at retail sportsbooks. Starting March 5, they will be able to register online or mobile.

The in-person law granted a major advantage to BetRivers, whose casino is located much closer to the city of Chicago than competitors FanDuel and DraftKings. It will also make it much easier for bettors to have multiple accounts on different platforms.

The new legislation amendments also allow for a retail sportsbook at Wintrust Arena, the homecourt of DePaul University and WNBA’s Chicago Sky. 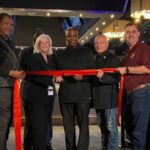