Kansas Gov. Laura Kelly ceremonially signed Senate Bill 84, which legalizes sports betting in the state, on Monday. Legislators and casino industry representatives joined the governor for the signing at the Statehouse. Wagering is effective July 1, and the governor said she is optimistic state regulators will have live betting up and running as early as football season.

The bill was first passed by legislators in the Sunflower State and sent to Kelly’s desk in late April, who signed it into law in May. While regulators must set up guidelines and launch operations by Jan. 1, 2023, Kelly provided a more optimistic timeline, hoping wagering could go live this fall, sometime during the collegiate or pro football season.

“Soon, sporting events, casinos, restaurants, and other entertainment venues will have another way to attract Kansans to their establishments,” said governor Kelly on Monday, according to KWCH. “Legalizing sports betting is a common-sense solution that will keep Kansans’ money in Kansas.”

Projections for how much the state stands to gain from legal sports wagering vary, with some estimates predicting about $41 million in revenue over the next five years, and Kelly touted the potential to help in critical areas. “We’re not going to be balancing the budget on the revenues coming in from sports betting, but every little bit helps,” she said, according to Kansas Reflector. It is expected wagering will allow funding of schools and roads, and expand broadband.

State-owned casinos in Dodge City, Pittsburg, Mulvane and Kansas City, Kansas, which are established under the control of the Kansas Lottery, would all be permitted to conduct operations. The legislation allows both mobile -each casino could operate up to three online platforms- and retail betting at casinos, and up to 50 other locations chosen by the venues. Major operators like DraftKings, FanDuel, BetMGM and Bally’s have all announced plans for the state.

Gaming facilities could enter agreements with pro sports franchises to place kiosks at a team’s venue, such as Sporting Kansas City or the Kansas Speedway, as part of the 50 businesses and entities they are allowed to partner with. The law is also good news for restaurants and nonprofit fraternal or veterans organizations, which may also hold wagering under the new regime.

Today I ceremonially signed bipartisan legislation to legalize sports betting in Kansas. This bill is a common-sense solution that will keep Kansans’ money in Kansas. pic.twitter.com/oVZiPUl6Ir

Recognized Native American tribes are also able to submit a request to the Kansas Gov. and Kansas Lottery director to operate a sportsbook “under the substantially same terms and conditions” applied to the state’s four casinos. Gov. Kelly has said the process of negotiating new or updated gaming compacts to include sports wagering is already underway.

Under the new law, the state lottery and the Kansas Racing and Gaming Commission will share oversight of the new market. Kelly described on Monday the legislation as “one more way” in which her Administration is working to make Kansas “the most pro-business, pro-growth state in the country.”

Next up, the state Racing and Gaming Commission plans to present a set of draft rules at a July 22 meeting for how it will receive, consider and approve proposed gaming facility contracts. At that time, the commission can also approve these regulations.

Among its most discussed features, the law calls for a 10% tax on each bet, with a total of 80% earmarked for a Kansas Department of Commerce fund to provide incentives for pro sports teams to come to the state. This led to speculation the state could be seeking to lure the NFL’s Kansas City Chiefs from Missouri, but Kelly has now dismissed that idea.

“I have never approached the Chiefs, nor has anybody in my administration,” Kelly said, according to Kansas Reflector. “Quite honestly, the amount of money that this bill would generate and put into that fund would not come close to being what you would need to be able to attract a major league team.”

In late May, Brandt Iden, Head of Government Affairs for Sportradar and former Michigan representative, told Yogonet in an exclusive interview that while he did not believe the fund would suffice to lure the Chiefs to Kansas, the law could give the state the upper hand in other regards.

“I don’t really think that, at the end of the day, there’s going to be enough in that pot, which would probably be around eight million dollars a year,” he stated. “These are big franchises; they’re going to need to be lured with big dollars.”

“But here’s where I do think there’s a game-changer in the Kansas legislation: pro sports teams would be allowed to partner with operators to put in a sportsbook,” Iden remarked. “And that is something they may be interested in doing: putting an actual retail sportsbook in the stadium, which is something that we’ve seen in other states that have been grappling with legislation. It is an opportunity for those sports teams that are right on the border, so I’m excited to see how that will shake out.” 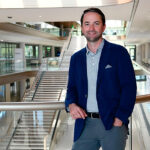