A month from its realization, SAGSE Latam expo, set to take place on March 30th and 31st at the Hilton Buenos Aires Hotel and Convention Center, completed the first sales phase and has opened the waiting list for participating companies.

The event is closed and exclusive to operators, regulators, sponsors, and exhibitors with the aim of promoting a 100% business and networking space (a formula that has worked in previous editions such as SAGSE Miami last year). “It is a new format and experience has proven its effectiveness, respecting the investment and effort made by the entire industry to get together,” Monografie, the company organizing the event, stated.

“Fortunately, SAGSE LATAM is already full of decision-making businessmen, senior executives of private and public operating companies, including state, online and physical lotteries in the region”, said Giorgio Gennari Litta, President de Monografie. “We have achieved our objectives 1 month ahead of the event taking into account the challenging international context. It should be noted that to the traditional expo, with this new venue, we will add Zitro University on the first day and the SAGSE Talks on the second day”, he added.

“We have also closed and completed the first edition of an unpublished document, SAGSE Magazine. Its first edition already has more than 100 pages and will be delivered to the attendees of the expo in both physical and digital formats. This novel magazine will be composed of a formula that mixes that catalog of the traditional expo with interviews and notes of interest in each of its editions, along with reviews and launches of products and services from companies present throughout the continent”, concluded Giorgio Gennari Litta.

“SAGSE LATAM, on this 30th anniversary, will be the most important meeting point of Latin America and this closed and exclusive event formula for Operators, Regulators, and Sponsors, added to the new headquarters gives it an optional context, a twist to international events, expo and conferences. This edition of SAGSE will mark a before and after within the industry and we are grateful for the great support provided by the national and international industry”, said Alan Burak, Vicepresident of Monografie. 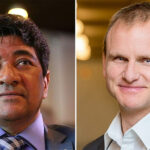