Back in May, news broke that two of the world’s strongest men were planning to box each other. It was a surprising piece of news and some brushed it aside as a publicity stunt. It now appears that the Hall vs. Bjornsson boxing match has been confirmed to take place in September of 2021.

Fans of both boxing and strongman competitions are excited to see what happens between these two men. Today, we’ll take a look at how these two men match up.

The sport of boxing has a massive fan base around the entire world. In recent years, something unusual has happened with the sport. There’s been a huge increase in the number of celebrity-style matches that draw in fan interest.

Celebrity boxing matches have always taken place. In the past, however, these were generally seen as fringe events that didn’t bring in many viewers. That is no longer the case and these fights are bringing in huge Pay-Per-View sales recently.

The YouTube community seems to be responsible for this change. Back in 2018, Logan Paul and KSI competed in a major amateur boxing event filled with other YouTube celebrities on the undercard. It was a major success, and they scheduled a professional rematch a year later.

The Paul-KSI rematch ended up being even bigger. Not long afterward, Logan’s brother Paul made his professional boxing debut against a fellow YouTuber. Once again, this event proved to be hugely successful.

Jake Paul is set to return to the boxing ring this weekend against former NBA player Nate Robinson. It’s an interesting matchup between the two men. No one expects either of them to make a move against legitimate boxers, though. If he wins, we could see Jake fighting his brother at some point next year.

We’re now beginning to hear about a massive (no pun intended) fight between two of the strongest weight lifters on the planet.

Reports Confirm the Hall vs. Bjornsson Boxing Match for September of 2021

These kinds of celebrity boxing matches aren’t slowing down anytime soon. Earlier this year, reports came out that Hafþór Júlíus Björnsson and Eddie Hall were interested in boxing each other. These are two of the most successful weight lifters on the planet with massive followings on social media.

Since that news, nothing has come to fruition. Many felt the initial reports of them fighting was simply a move to gain more attention. It now appears this is a legitimate fight that will be taking place in Las Vegas next September.

One of the biggest boxing management companies operating today, MTK Global, has confirmed this news. “Thor” Bjornsson spoke about this situation to the media this week. He seems to be excited with the way this fight has come together.

“I’m very excited with MTK Global’s involvement as this is something I’ve been taking very seriously and I want others to know how serious this fight will be,” Bjornsson said. “I’ve been extremely focused and dedicated in my training as always and I am looking forward to getting in that ring.”

Both of the men seem to be training hard for this matchup. Unsurprisingly, they’re taking a more cardio-heavy approach to this bout, rather than a traditional weight lifting training routine. Hopefully, they both have good showings of themselves.

This fight is still many months away. It will be interesting to see if it really ends up coming together. Stay tuned for updates!

Tyson vs. Jones Jr. is Just Around the Corner!

Mike Tyson and Roy Jones Jr. are two of the most legendary boxers on the planet. A few decades ago, they were both dominating in their respective divisions. Unfortunately, fans never got to see them compete against one another while they were in their fighting primes.

We’re getting the next best thing this weekend. Tyson and Jones will be competing for eight two-minute rounds live on Pay-Per-View. It’s a huge fight and fans are now flocking to different online sportsbooks to place their wagers on the event.

Bovada is offering some fantastic odds for each man. For now, Mike Tyson is listed as the -200 favorite. He is the significantly bigger man and seems to be in fantastic shape for this fight. Many feel that Mike will earn a knockout early into the fight.

Roy Jones Jr. was once considered the best pound-for-pound boxer on the planet. There’s no doubt he’s past his fighting prime, yet Roy still has some tricks up his sleeve. Bovada gives him odds of +160 to get the win this Saturday.

The sport of boxing continues to evolve. We’re seeing a huge number of celebrity boxing matches take place. We may even get to see the Hall vs. Bjornsson boxing match take place in September of next year!

Are you a fan of celebrity boxing matches? Let us know in the comments section below. 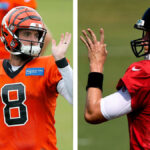