U.S. commercial gaming revenue continued its record-shattering start in 2022 with the highest-grossing February on record. It was driven by the continued growth of slot revenue and sustained strength of sports betting and iGaming, according to the American Gaming Association’s (AGA) Commercial Gaming Revenue Tracker, updated Tuesday.

In February, combined commercial gaming revenue from land-based casino games, sports betting and internet gaming reached $4.39 billion, up 16.1% from February 2020—the last full pre-pandemic month of casino operations—and up 35.9% from a year ago. In a monthly comparison, revenue dropped 3.1% as sports betting win nearly halved compared to January. February also marked 12 straight months with $4B or more in revenue, which had not happened prior to 2021.

Therefore, 2022 has seen the industry’s fastest ever start to a year, with $8.92 billion in commercial gaming revenue generated in the first two months, up more than 19% from the previous record set in 2020. Following a record-breaking 2021, U.S. commercial gaming revenue in January reached $4.43 billion, the industry’s fastest-ever start to a year.

Eighteen of 27 commercial gaming states that were operational two years ago saw revenue growth from February 2020. Only five states are behind their gaming revenue pace at the start of 2020: Kansas (-11.7%), Louisiana (-2.3%), New Mexico (-6.4%), Oklahoma (-5.2%) and Rhode Island (-13.3%). The lower win for the two Rhode Island casinos reflects, in large part, the highly competitive environment of New England after Encore Boston Harbor opened in June 2019, while Kansas casinos continue to feel the impact of added competition from a new tribal gaming facility close to the state’s largest commercial casino.

Casino visitation levels remained largely unchanged from recent months with admissions in Illinois, Iowa, Louisiana, Mississippi and Missouri increasing on average 21.8% from February 2021, when casino operations remained limited from COVID-restrictions. Destination markets experienced a similar dynamic. Las Vegas visitation contracted by 21.5% from February 2020, but was 69.9% higher than a year ago, according to the Las Vegas Convention and Visitors Authority.

With lower overall visitation compared to pre-pandemic levels, commercial gaming revenue growth is driven by increased average gaming revenue per casino admission. Average casino revenue per visitor in 2022 is up by about 34.2% across the five reporting states. However, the overall rise in spend-per-visit isn’t enough to offset overall visitation declines in all states.

In February, commercial gaming revenue from sports betting and iGaming continued to grow, though the pace of sports wagering growth slowed due to a quieter sports calendar. Land-based and online sportsbooks generated $324.6 million in revenue from commercial operations in 26 states. This is a 40.3% gain from 2021 when commercial sports betting markets were live across 20 markets.

On a sequential basis, sports betting revenue declined 48.7% as the end to the NFL season brought a lull in sports betting activity between Super Bowl LVI—with an estimated event handle of $7.61 billion—and the start of the NCAA Basketball Championship. The month-over-month revenue comparison was also impacted by a lower hold percentage: bettors nationwide kept 95.2 percent of the $6.77 billion U.S. handle, compared to 93.6 percent of $9.84 billion wagered in January. The figures for February will improve somewhat when Arizona and Illinois data is released.

Taken together, revenue from iGaming and sports betting accounted for 15.9% of combined commercial gaming revenue in February—the lowest share total revenue since August 2021. 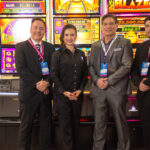